I love writing humor (loosely defined, of course), but have recently found myself on the short end of a catastrophic calendrical crunch. Much of that crunch is due to my co-editorial (again, loosely defined) duties at Brutish&Short, where, since February of this year, I have been attempting to showcase my marginally more serious side on at least a daily basis, rather than just a weekly or biweekly one. Though my fellow coeditors don’t tolerate nearly as much monkeyshine as I would like, I do manage to sneak in a live one here and there. However, between the new blog and a day job that also consists entirely of writing — indeed, which features the word “writer” in the job title — the time and energy I need to continue this vapid vanity project just aren’t there anymore.

Thus, rather than continuing to die a slow and silly death by pretending that I’ll be returning to my wisecracking ways any day now, I’m officially pulling the plug on this exercise in senility. And no, 48 months is not a very long time to pursue something you claim to love, but in blog-o-years, that’s an eternity, so since all bad puns must come to an end, consider this Write in the Kisser’s. But before we go, how about one last poop joke? You know, for old time’s sake.

Knock knock.
Who’s there?
Poop.
Poop who?
Poo-poo comes out your butt!

Ahhhhh, it’s good to go out at the top of your game. 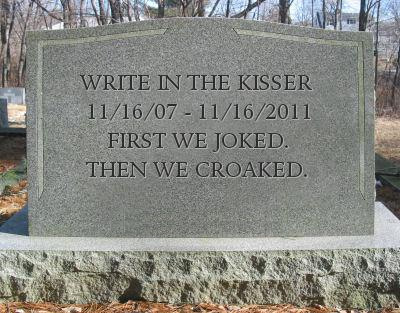 This entry was posted in Site News and tagged Goodbye. Bookmark the permalink.

1 Response to Happily Ever Laughter