The twentieth installment of my abandoned Granadino memoir, Flawed Abroad: Useless editorializing from an ignorant, close-minded American on his semester overseas. 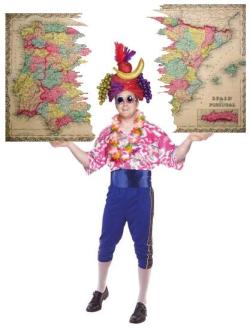 Fun fact: This view from the stage would be twice as handsome if yours truly were in the audience!

We went to a flamenco ballet at El Teatro Alhambra last night.  I entered the theater prepared to be epically bored, but actually left fairly entertained… for a jaded cultural cynic, I mean.  Apparently, the word “ballet” doesn’t have quite the same meaning here as it does in the U.S. or Russia (thank Dios).  The whole affair was a sort of futuristic light show with some interpretive dance thrown into the mix.  But the best part came when the performers acted out what seemed to be an Andalusian version of “You Got Served.”


One of the backup dancers starting miming the act of talking smack about the rest of his entourage, who in turn took mock offense at his antics and challenged him to a break dancing contest.  Afterward, everyone stood up and brushed some dirt off their shoulders.  I was delighted by the entire performance, even if the male lead did get naked on stage for no apparent reason during the show’s closing act.  I guess it was artistic or some crap like that.  None of the chicks disrobed though, which is probably why, on average, they still only earn 80 cents for every dollar a man makes in most of the modernized world.  Friggin’ prudes—show some skin!

Oh yeah, I almost forgot.  I found a rug the other day!  (In my apartment, that is; I wasn’t scouring the city for one or anything.)  Lest you’ve forgotten from earlier chapters, rugs are apparently a non-entity in Granadino apartments, as neither I nor any of my classmates could honestly attest to ever seeing any in our respective domiciles.  The rug in question was discovered rolled up under the couch while my señora was cleaning, so I asked her what it was doing there.  She told me that that’s where she kept it.  As you might expect, I was severely tempted to continue the conversation, but instead settled for nodding at her in a vague imitation of understanding, as if permanently storing a nice area rug under your sofa was the most natural thing in the world.

Miscellaneous Observation: I’ve learned two very important things about churros in the last two days:  Firstly, for some unfathomable reason, every churrería in Granada stops selling their titular product from approximately 13.00-19.00.  I asked one of the vendors why this was and he told me that it was because they didn’t make them during that time.  I couldn’t very well argue with that (because my head would have exploded), so I contented myself with my second realization, which is that, depending on the churerría, I can buy a single serving of churros (i.e., enough to choke a Shetland pony) for between 50 and 90 centimos.  I can’t even begin to think of another comestible—either here or back in the states—that can be purchased for less than a Euro and actually leave me feeling full.  Gosh I heart España.

Miscellaneous Anecdote: My señora served conejo (rabbit) for dinner yesterday.  One of my friends had told me earlier that rabbit actually does taste like chicken, so I had no objections when I saw it taking up residency on my dinner plate.  But before I could dig in, my señora asked me for the American perspective on eating rabbit.  I explained to her why it wasn’t as popular stateside due to the cultural connotation of bunnies as adorable household pets and popular children’s book characters.  She was decidedly unimpressed by this explanation, pointing out that los conejos son animales como las vacas y los cerdos que te gustan tanto y matando uno para comerlo es igual a matando otra para comerlo—which translates to, “Rabbits are animals just like the cows and pigs you like so much and killing one for food isn’t any different than killing another.”  Además, she elaborated, once you’ve skinned it, cut it up into little pieces, and cooked it, the rabbit in question is no longer particularly cute.  I found little fault with her reasoning and so began gnawing on the nearest haunch in silent acquiescence.

This entry was posted in Flawed Abroad and tagged food, Granada, Spain. Bookmark the permalink.