The eighth installment of my abandoned Granadino memoir, Flawed Abroad: Useless editorializing from an ignorant, close-minded American on his semester overseas.

Well, I finally saw Alex C. again. It was pretty much the first time he’d left the house in two days, having stayed out at SugarPop until 8.00 Friday morning with Justin and Sarah E. and, apparently, sleeping like the dead for the last 40 hours or so.[1] Conveniently, a guided tour of the Albaicín—the oldest quarter in Granada and home to much of its gypsy population—provided him with enough of an excuse to interrupt his marathon snooze.

The tour was, as the kids say, “pretty neato,” but since I’m a total schlub with almost no attention span for historical narratives, I really couldn’t tell you a thing about it. (If you’re still hoping that this shallow journalistic account might turn into a legitimate fact-filled travelogue, detonate that fantasy right now. It ain’t happening.) To prove how painfully boorish I really am, I should probably mention which part of the tour appealed to me most, because it was not the fascinating history behind the various 1,000 year old edifices, nor was it the breathtaking vistas we were treated to at the apex of our uphill journey. Rather, the spectacle that has remained lodged in my cortex the longest was the river (see picture below) we walked past at the very beginning of our tour. What made this particular rio so memorable? Well, in addition to its alluring—though conventional—wetness, there was also the peculiar sight of dozens of stray cats lounging languidly along its banks. Big cats and small cats. Fat cats and skinny cats. Hep cats and dog-cats. The cat’s pajamas and the Cat’s Meow®. Every type of cat you could possibly hope for could be found on that riverbed.[2] 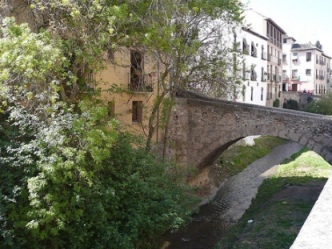 El Rio Darro (literally translated as "The Rio Darro"). And yes, I realize there are no cats in this picture, but that doesn't mean you have to be a jerk about it.

Come to think of it, given how sleek and well-fed these foreign felines appeared (or, in the picture above, didn’t appear), perhaps they weren’t strays after all. Perhaps—just perhaps—this river was some sort of local cat café, and our furry friends[3] had really just popped in for a quick leche con ratón. Yeah, that’s what it was, a cat café……(Hey, a man can dream, can’t he?)

___________________
[1] As pointed out to me in an earlier comment by the invaluable ‘Steban, this may very well be “the same night that Luis was accosted by a large Moroccan fellow who claimed that Luis owed him a few Euro for a lipring he’d allegedly stolen from him” during Luis’s first semester in Granada. ‘Steban goes on to remind me that, when accused by said Moroccan of said dirty deed, “Luis shouted Spanish vulgarities we couldn’t understand and insisted the item in question was actually an earring he’d stolen from an unassuming female friend.” Best of all, “these events materialized only after we [‘Steban and Luis] had been offered numerous damn-near convincing sales pitches to purchase bootleg hash.” Ahhhh, memories…
[2] Though why anyone would ever hope for a cat is beyond me. Despicable, conceited creatures, the whole lot of ’em.
[3] Enemies.

This entry was posted in Flawed Abroad and tagged cats, Granada, Spain. Bookmark the permalink.